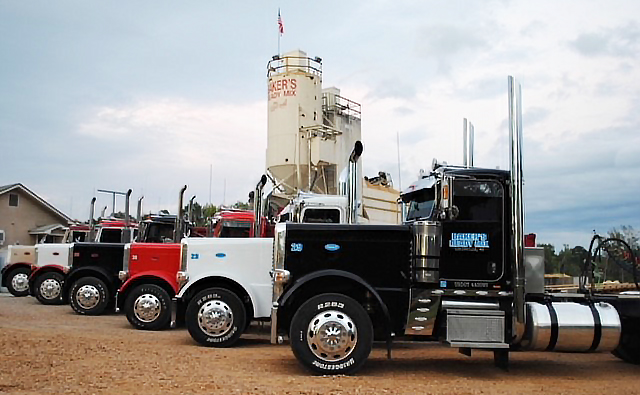 From concrete to limestone, dirt work to pad construction, and equipment rentals to equipment hauling: It’s easy to see why Bakers Ready-Mix owner Billy Don Baker says, “In this part of central Mississippi, we’re a one-stop shop for everything.”

The Louisville, MS-based family business has been a part of most of the major construction projects in the area for nearly five decades, and has established long-standing relationships with hundreds of contractors.

Baker’s father, Billy, and mother, Peggy, established Billy Baker Construction Co. in 1974, with one backhoe loader and one dump truck, installing septic tanks. In 1980, the elder Baker purchased an existing ready-mix company. Today, the ready-mix business accounts for about half of the Baker firm’s operations, and operates primarily within a 35-mile radius of Louisville. The construction side operates within a 100-mile radius, which includes the towns of Starkville, Philadelphia, and Columbus, among others.

Billy Don Baker, a Louisville native, started working at his father’s company at age 15. “I was on a work/study program at school, and when I got out of school in the afternoon, I’d come down here and work with the mechanics,” he recalls. “Originally, I thought I wanted to be a diesel mechanic.”

However, when he turned 18 he earned a commercial license instead and began hauling equipment for the company, as well as operating equipment himself.

The company has supplied the concrete, and other construction materials, for a wide variety of projects in the Louisville area, including new Wal-Mart and Dollar General Stores and several new fast-food chain locations. Bakers Ready Mix was very busy after a severe and dangerous tornado ripped through Louisville in 2014, Baker says.

“One very big project was supplying the concrete for a large new plywood plant for Winston Plywood, who is one of our big employers here. “We’ve also been part of the construction of a new safe-room dormitory shelter in downtown Louisville.  It’s a dome-shaped building that can hold 700 to 800 people. We did the site work, including moving over 3,000 yards of dirt, and supplied the concrete.”

Other major projects the company has recently undertaken include site work for a new building for Shuqualak Lumber (where Baker hauled approximately 600 truckloads of dirt), and supplying materials for the new Winston County Hospital. Says Baker about the hospital project, “That was one of our most challenging projects.  That construction required work around the clock, seven days a week.”

Baker’s all-Cat fleet of construction equipment includes a wide range of machines, in order to serve the company’s diverse mix of customers. The fleet includes five hydraulic excavators, three backhoe loaders, two dozers, two wheel loaders, and a compact track loader, among others. The firm’s first Cat machine was a new D5 dozer, purchased in the 1980s; its latest purchases include a 420F2 backhoe loader, D6N XL dozer, and a 304E2 mini excavator. The wheel loaders and backhoe loaders are utilized at the firm’s central plant – loading trucks with crushed rock, mulch, and other materials.

The new backhoe loader is used every day, according to Baker, and the new dozer is used several days each week.  Both are equipped with Product Link™ remote monitoring. Baker comments, “It provides a lot of operating data, and helps us monitor fuel consumption.

“Cat just makes good equipment,” he states. “And when I get ready to trade a machine in, the resale value is better than any other machine out there.

While Baker reports that his company performs the bulk of their own equipment maintenance, he adds, “If it’s something we can’t do ourselves, we call Thompson Machinery; sometimes we have a field service technician come out to the site, and sometimes we take the machine to Thompson’s site. But here’s the thing – we’ve had other brands of machines where we either had to replace engines or transmissions, but with the Cat equipment we’ve never had to do anything major. Cat machines just last and last.”

A THOMPSON CUSTOMER AND  A SUPPLIER

It’s certainly worth pointing out that Bakers Ready Mix is not only a long-time, valued Thompson customer – they are also a trusted vendor.  As Baker explains, “We haul probably 90 percent of Thompson’s equipment for them in the Columbus area, including for the Cat Rental Store.  We also do a lot of hauling for Thompson’s Memphis, Greenwood, and Tupelo stores.”