Under Patrick Cook’s leadership, Clarksville, Tennessee-based Cook’s Nursery & Landscaping, the firm started by his father has grown to become an important presence on many high-profile construction projects in Montgomery County and the surrounding area.

Patrick Cook was born in Clarksville and raised on his family’s farm.  He graduated from Austin Peay University with a major in Agricultural Business.  Patrick, his wife Callie, and their children Ryder, Case, and Clayton Ann, still live in Clarksville. In fact, he bought the family farm and raises cattle.

“My father started this business in the early 1970s,” Cook recalls.  “He moved away from landscaping in the 1980s to focus on building and developing.  My brother Chris and I took over some of the equipment our father owned and kept the landscaping business going – we even did the grading on some of my father’s jobs.”

When brother Chris went away to college, Patrick stayed in Clarksville, where he has been at the helm of the company since 1997.  Chris also went into the construction field, and owns a company which does sewer and utility work.

Patrick says that he started out working at restaurant sites and other small commercial jobs, doing the finish grading and landscaping.  “On some of these jobs, I would end up going back behind the dirt contractor and doing some re-grading,” he relates.  “Ultimately I decided that I could do that dirt work myself.”

This was the beginning of the evolution of Cook’s company into a full-fledged site development firm with 10 employees. The company now specializes in commercial site preparation, along with subdivision roads and road widening projects. (Cook says that while he has considered changing the name of the company to better match their focus, it is the now well-recognized name under which he built his strong reputation in the Clarksville area.)

One early large-scale job for Cook’s company was the Clarksville Marina at Liberty Park. The facility features a 10-acre fishing pond, a four-lane boat ramp into the Cumberland River, and four pavilions, among other amenities.  Cook comments, “We were not the prime contractor, but we ended up doing a lot a work 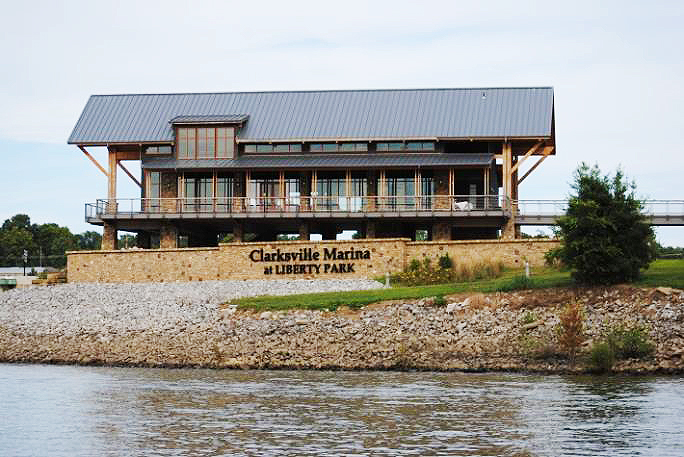 on multiple small components of the project. This job had its share of challenges, including the fact that the area flooded twice during the construction phase, which was at the time of the major flooding on the Cumberland in 2010.”

Geographically, Cook’s Nursery & Landscaping works primarily in Clarksville, Nashville, at Fort Campbell. The company is well-established as a supplier of excavation and utility work at the United States Army installation, which is located on the Kentucky-Tennessee border between Hopkinsville, Kentucky, and Clarksville.  The base is home to the 101st Airborne Division and the 160th Special Operations Aviation Regiment.Currently, Cook is also working on two United States Department of Veterans Affairs projects in the area. One is the expansion of the Nashville National Cemetery, a VA cemetery in Madison, Tennessee which encompasses over 64 acres. In Clarksville, his company is at work at a new, larger VA Clinic, a 34,000-square foot facility projected to be completed at the end of 2017.
______________

Cook relates how he started out with only some older machines, including a couple of small dozers and a skid steer loader.  He now has 20 pieces of equipment in his fleet. His first Cat machine was a D5G purchased in 2005; he now owns multiple Cat dozers, excavators, and track loaders.  His latest purchases from Thompson Machinery include a 289D compact track loader and a D6N XL dozer with Grade Control.

Cook comments, “The industry is at the point now that without GPS, construction companies don’t want to work with you. In fact, telematics are required for jobs at Fort Campbell. I considered various configurations, and the D6N was the right fit – because all the components are totally integrated into the machine at the factory.

“David Boone (Thompson Machinery Sales Representative) helped me every step of the way in choosing the right machine for my applications, and SiTech Tri-Rivers came out and set up the machine.  All this support made it a super-easy transition.”

“I rely on Thompson’s support,” Cook continues.  “Even when I just had one Cat machine, I always received the same level of support that I receive now.  When things are slow, we’ll do a lot of the service on our machines ourselves, but in the busy summer season I send machines to Thompson – I know they will do it quick and do it right.

“One thing that has meant a lot to me was that Thompson built a multi-million-dollar facility right in Clarksville, to support local contractors,” he adds.

Looking to the future, Cook says the sky’s the limit right now, and considers himself fortunate to be in a booming area; as he points out, Clarksville is the 2nd largest growth city in the state. “As our equipment needs evolve, I look forward to continuing to work with Thompson,” he states. “I attribute a lot of our success to our partnership – Thompson Machinery is one of the reasons we’re successful, and I don’t want to change that.”