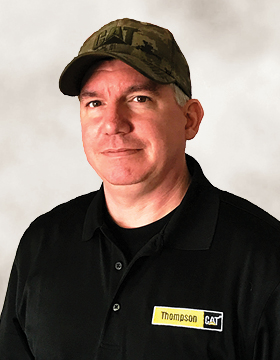 Thompson Machinery is pleased to announce that Geoff Dreaddy has been named to the position of Shop Supervisor for our Nashville Cat Rental Store.

Dreaddy, who is originally from Newfoundland,Canada, served as a mechanic in the United States Air Force from 1998 to 2005.  He then worked as Chief Aerial Mechanic with Nations Rent before joining Thompson Machinery in 2008. Originally hired as a Rental Store shop technician, Geoff later worked as a Thompson compact machine mechanic.  Prior to assuming this new position at the beginning of 2017, he held the position of Rental Store Shop Mentor.

Rental Store Manager Chet Kelley comments, “Geoff has an extensive background working on Cat equipment, especially the compact equipment line.  He also possesses a great deal of knowledge on all our allied products, including aerial training from JLG, Genie, and SkyJack products.”

Geoff’s new role is one more step in Thompson’s enhancement of our equipment rental business, an ongoing effort which includes a new Rental Store operation in Jackson, TN and a soon-to-open new store in downtown Nashville.