Buddy Prisock was born and raised on a farm in Oktibbeha County, Mississippi, and stayed to establish a successful landscaping/construction firm right in his hometown of Starkville. Prisock’s family raised a dairy herd, and later other types of cattle, but Buddy says his father also did a great deal of sideline work putting in utilities for the City of Starkville. “After I graduated from high school in 1976, I wanted to return to farming,” Prisock relates, “and my dad and I grew soybeans on up to 1,800 acres.  However, we also used our dozer and backhoe to put in sewer and water lines, septic tanks and pads.

“We quit farming in the late 1980s, bought more equipment, and though we did less dirt work, we did logging jobs and other kinds of projects for about 10 years.  But that kept me on the road too much, so in 2000 I started back doing dirt work here in the Starkville area full time.

“Since then, I’ve been blessed to have many continuous customers.  Some of them date back to the mid-80s, when I was in this business the first time.”

When Prisock’s wife Gina retired after 21 years from Starkville’s OCH Regional Medical Center, she became the company’s bookkeeper and office manager. Sons Presly and Parker started coming along on Prisock’s jobs at an early age, he recalls. “Gina home-schooled them in the mornings, then they came to work.  They did all the jobs 12-year boys could do – they would get up in our 8400 dirt pan tractors and dig dirt all afternoon, even though their feet didn’t reach the floor of the cabs.”
____________ 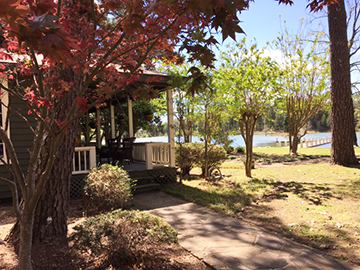 Prisock Dirt Construction’s expertise encompasses all underground work—water, sewer, and electrical, as well as paving, curbs,  and the construction of house pads. The company works on jobs large and small, Prisock says.  “One of our jobs was a project with around a dozen small houses; we did all the pads at one time.  We’ve also worked on multi-phase projects with up to 40 lots or more.”

One of Prisock’s first big projects after he returned to dirt work was at Starkville’s Wildbriar subdivision; the work included the construction of a 44-acre lake, 2-1/2 miles of streets, and over 60 lots. More recently, he worked on a 21-apartment complex which included several multi-story buildings; Prisock installed all underground utilities.  At the same time, he still does work for customers who only build a handful of homes each year.

Headquartered in the beautiful, inviting home which Prisock remodeled, beside a lake that he also constructed, the company has 11 employees, and may add three or four each year during the busy summer months. Prisock reports that 99% of the firm’s work is in the Starkville area.  “We stay busy, and we’ve had to turn down work elsewhere.  But we’ll still occasionally do an out-of-town job for a longtime customer.”

He adds, “There are a lot of good contractors in the area who helped me out when I got started, and helped me learn how to do the job well.  I’ve been fortunate to have developed some strong, long-term relationships with many of them, such as Tabor Construction, with whom we’ve worked on a number or commercial and medical building projects. Another is Frank Jones Construction – we’ve been working together since 2004, and in fact we started Country Club Estates together. And there’s also Joe Dallas Construction and Mike Kracker Properties.”

Country Club Estates is one of Starkville’s premier residential developments, with many impressive homes on large lots. As Prisock reports, the first phase encompassed 48 full-size lots.  A second phase added over 50 lots.  The third phase, which is currently underway, encompasses 84 additional lots.

Today, both of Buddy Prisock’s sons are very active in the family business, and in fact own some pieces of equipment themselves. As Prisock explains, “Presly’s main role is in underground utilities; Parker focuses on site grading, clearing, pads, and streets. Presly has a 305.5E2 hydraulic excavator with a vibratory plate; it allows one man to pack the pipe as he lays it, instead of needing a jumping jack packer and additional crew. That machine has been a tremendous help to us.

“We also have a 323F excavator with grade control, and Presly keeps learning more and more ways of making use of it.  We’re very pleased with that machine.”

Buddy Prisock says that he values his long relationship with Thompson Machinery like he does his longtime customers.  “At the time we were starting out, we didn’t have a lot of equipment; even at that time, we would rent machines from Thompson, and over the years that have really helped us get just what we need.

“Casey Brooks (Thompson’s machine representative in the Starkville area) and David Burney (Thompson product support representative) make a point of checking in on me regularly, even if I’m not really needing anything.  And when I do need something, they are ready to take care of us.

“Casey helped us find a quick-attach coupler for our 305.5 that can be operated from the cab.  It saves us a lot of time, because we swap buckets a lot on that machine. We added a second 305.5 last year to meet our increasing workload.  Those mini hoes are really helpful for our production.”

Reflecting on the success and growth of Prisock Dirt Construction, Buddy Prisock comments, “I’ve been able to live and let live. I’ve met a lot of good people over the years. I’m blessed to have my customers, and I’m blessed to have Thompson Machinery.

“I truly feel that my success is at the end of the day, my crew going home safely; at the completion of each job, a satisfied happy customer; then, being ready to move to the next project. And lastly, my trust in Caterpillar equipment allowing us to get the job done in a timely manner, with Thompson Machinery always keeping us running — including sales, parts, maintenance and rentals as needed.”