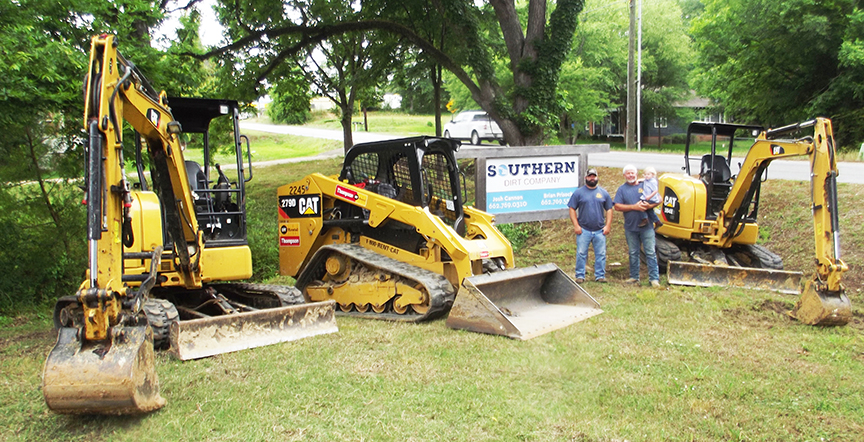 FROM ONE TRUCK TO A THRIVING BUSINESS

Business partners Brian Prisock and Josh Cannon started Southern Dirt Company in 2014 with just a dump truck.  Soon, however, they bought a Cat D5H dozer and a Cat 315 excavator for the business that was steadily growing. Today, the Starkville, MS firm is an established resource for commercial, residential, water and sewer construction – or, as Prisock puts it, “Anything dirt-related, as well as some demolition work.”

PRISOCK AND CANNON ARE LONGTIME INDUSTRY PROFESSIONALS
Prior to joining forces, the two owners each had extensive industry experience, Prisock, a Starkville native, has been active in residential building for over 40 years.  “Before the economic downturn several years ago, I built a lot of customer homes in the Starkville area,” he relates.  “I still operate that business, Brian Prisock Construction, on a smaller scale.  I still build for people who have been referred to me by older customers.”

Cannon was born in Jackson, MS and later lived in Lexington, MS through his high school years. “I’ve been doing this kind of work since 2001,” he comments, pointing out that his father was also a contractor.  Cannon worked for a dirt construction company for several years; he also did pipeline work for a time, in West Virginia, Pennsylvania, Ohio, and Texas.  “I actually did some pad work for Brian at one time,” he adds.

After starting Southern Dirt, one of their early jobs was a large residential development.  The firm did a good deal of site clearing and home site building – including the second phase of the upscale Stone Ridge subdivision in Starkville.

“We work mostly in the Golden Triangle area,” Prisock reports.  “We stay busy enough that we rarely have to go outside this area for work.  Our small jobs have been as good for us as our large ones.”

Today, the company has four full-time employees, and works regularly with several local subcontractors. Cannon’s wife Paige – who is also Prisock’ s daughter – is the company’s bookkeeper; the real boss of the company, according to Prisock, is his grandson Price Cannon!

LARGE-SCALE PROJECTS ARE PART OF SOUTHERN DIRT’S EXPERTISE
One of Southern Dirt’s major current projects is a multi-use development in midtown Starkville, which will have commercial space at street level and apartments on the upper floors. Cannon says this job has presented several challenges.  “We had to work on a very tight deadline, and had to deal with a lot of rain during the construction phase.  Our work included demolition of more than a dozen structures, including some old homes.  We hauled 30,000 yards of dirt.”

He adds that another recent big project was at the site of a volume freight terminal, where their work was spread across extensive acreage.  The company also recently completed a subdivision job where a man-made lake had to be drained and completely filled in.

COMPANY’S ALL-CATERPILLAR FLEET IS WIDE RANGING
From its beginnings with just one dump truck, Southern Dirt’s all-Cat fleet has grown to include a wide range of equipment – including an older TH103 telehandler Prisock bought for his own business some years ago. The company’s fleet now includes two 303.5E2 mini excavators, a 299D2 compact track loader, a CS433 vibratory smooth drum roller, a 320D L excavator and a 315B L excavator, and a D5H2 LGP dozer.  Their most recent purchases are a 279D compact track loader and a 304E2 mini excavator. Southern Dirt also rents equipment from Thompson when all their machines are already working or when they need a specialized machine for a particular job, according to Prisock.

Asked about their Thompson Machinery representative, Casey Brooks, Prisock says, “Casey is the best.  He always checks on us, and does more than his job requires.  He has even helped us work on equipment himself.

CAT EQUIPMENT MEETS THEIR NEEDS
“We love the versatility and speed of Cat equipment – Cat just meets our needs,” adds Cannon.  “When we’re running Cat machines, it just feels natural. Thompson provides fast service – we utilize both their shop and their field service, and we buy a lot of parts, too. They make us feel like family.

“When I was working on the pipeline, 90 percent of the equipment I saw was Cat; the other brands just don’t seem to hold up like Cat does. We’ve had the opportunity to buy from others, but we are really satisfied with Cat, Thompson, their service, and Casey Brooks.”

It is clear that Southern Dirt Company is truly a family business.  Says Cannon, “Our business is our family and vice-versa.  We put family first, and make time for them no matter how busy we are. And we treat our employees like family, too, because we couldn’t do this without them.”

“The future is looking bright for us,” state Prisock.  “We have the greatest customers, and we look forward to pleasing them in the future.”