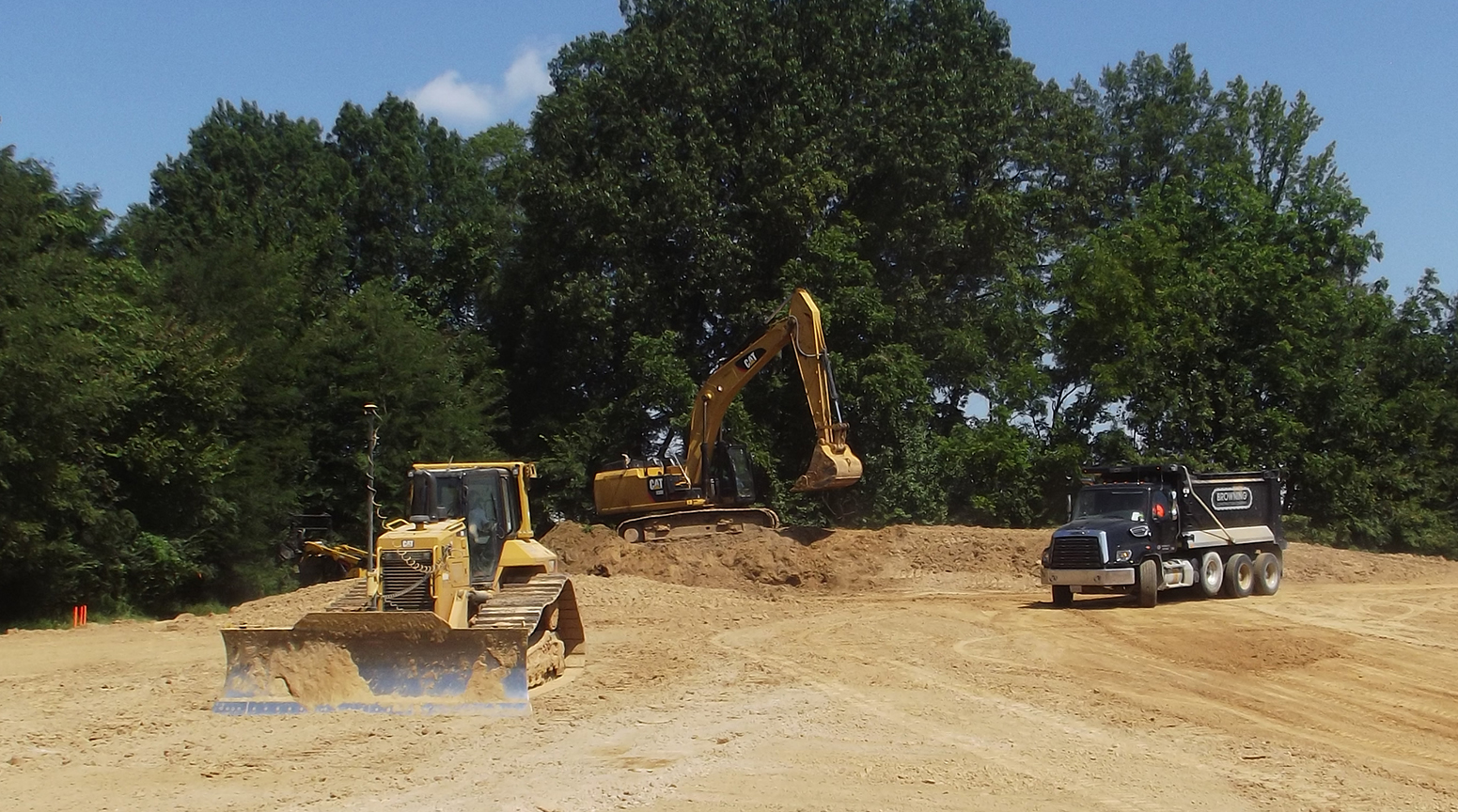 John Browning started his construction company in 1978, with just one employee; for a time, he also sold used cars as a sideline business. He started out doing smaller, mostly commercial project jobs. Today, however, Browning Construction Company – with 40 employees and its headquarters in Collierville, Tennessee – is a major Memphis area resource for excavation and grading work.

The Browning family has strong ties to the construction business. John’s father had his own construction company, which is where John got his first experience in the industry; younger brother Jeff also has a contracting firm in Memphis.

“We’ve done work all over,” says Project Manager Corey Mills, “generally in the Memphis area, but also in places like Nashville and Oxford. We’re doing a lot of warehouse work right now, but we do all kinds of commercial projects, from parking lots to shopping centers, road work to airport runways.

Mills has been with Browning Construction for eight years now – but his relationship with the company goes back even further. He explains, “I knew the family, and had met John before. He offered me a job doing computer work such as keeping their maintenance records, and later I started working with the estimator.

“At one point, I left the company to do finance work. But I found that I didn’t like it, and I came back to Browning Construction.”

Mills was born in Monroe, Louisiana, and later lived in Corinth, Mississippi and Memphis, where he attended Christian Brothers High School. After graduation, he attended Ole Miss and then the University of Memphis; he received a Masters degree in Finance in 2008. Along with his wife and two children, he lives in Memphis.

Browning Construction’s recent work has included a number of large-scale projects, including 1 million square feet of warehouse space near the company’s office and a 1-1/2 million square-foot warehouse in neighboring Olive Branch, MS. At Memphis International Airport, Browning worked on a new sorting facility and ramp expansions for Federal Express, as well as a new airport rental car maintenance facility. Additionally, they have been a part of the major renovation of Bartlett High School in Bartlett, TN (a suburb of Memphis).

“We trucked 100,000 yards of dirt out of a 30-foot deep excavation for a new tower at St. Jude Children’s Research Hospital,” Mills reports. “It was a challenge to stay on schedule with that project – the dirt was unsuitable, and we had to work with a shoring company. We had to buy mats so trucks could run.

“The Collierville High School is another big and challenging project,” he continues.  “It required a lot of select clearing. Plus, we had to find creative ways to control water for erosion purposes, because of the size of the site.” The new high school is now the largest in the state; the 460,000 square-foot state-of-the-art campus is designed for 3,000 students.

Their new D6N LGP is equipped with Cat GRADE technology, about which Mills comments,” Today, you can’t have too many machines with GPS – they make life easier. The size of the D6N LGP and the 6-way way blade also make it very helpful in grading.”

Mills says Browning Construction uses Thompson Machinery for most of their Cat machine service work. “Letting Thompson do our service helps our shop guys spend time on other machines. All our service agreements are set up for field service, but we also bring machines in to the Thompson shop, depending on the type of service needed. We also have light inspections done to see if there is any other needed service work; this helps us prevent equipment failures. The maintenance and reliability are what make Cat our choice.”

He adds that Browning also rents from The Cat Rental Store when needed. “If one of our machines is down and we need something really quickly, or if our guys are really busy with other machines, the Rental Store helps us out.”
_________________

Asked about Browning’s philosophy of business, Mills states it simply: “Honesty with customers leads to repeat business, which is a good goal. We’d rather tell you something you might not want to hear rather than making something up.”