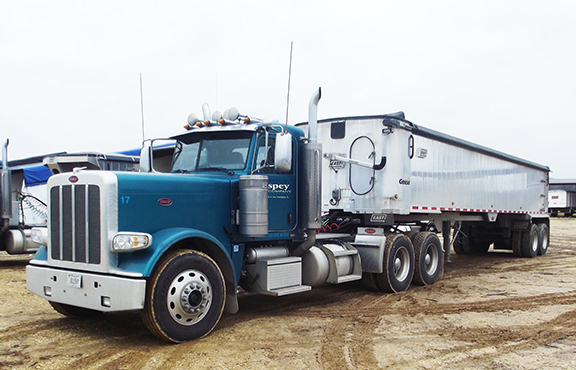 In northwestern Tennessee’s Carroll County, Espey Oil Company, Inc. is a long-established wholesaler/hauler of diesel fuel for area agricultural and construction companies. Espey Gin Company is also long known as a hauler of cotton, grain, seed, and fertilizer for ag businesses and farmers, a well as other companies which utilize the Espey-owned gin. Espey Oil and Espey Gin use glider truck kits from Thompson Truck Centers in their operations.    Shown above:  Peterbilt 389 Daycab Fuel Hauler

Billy Espey started out driving for an oil company – when it came up for sale in 1970, he purchased it. He bought a gin operation in McLemoresville in 1974, and founded Espey Gin Company that same year. Espey Oil Company was established in 1978.

Billy’s son, Allen Espey, now owner of the two family businesses, was born and raised in Huntingdon, where he still lives and where Espey Oil Company is headquartered. The gin and farm business is based in McLemoresville, adjacent to the company’s gin, which is located on a site where a gin has operated since 1898. In addition to the family firm, Espey also has partial interest in other gin companies.

COMPANY STARTED WITH ONE TRUCK
“My father started the hauling company with just one truck,” Espey recalls. “My mother (Carolyn)  always did the company books, and she is still active in the business. My son Will works for the gin side of the business and on our family farm.”

Allen, who had worked at the company while still in school, came in on a full-time basis to run the firm after Billy Espey died in 1986. “Our business grew through word of mouth,” Espey comments.  “That’s how we got started with most of our long-time fuel customers. The gin operation really grew after cotton production expanded again in the 1980s, and really picked up in the 1990s as the need for hauling cotton, seed, and fertilizer grew quickly.”

Each company now has six full-time employees, and during the busiest seasons the number can swell to 30 people, Espey reports.

Espey has another Peterbilt 389 fuel hauler currently on order from Thompson and has plans to order yet another one in the near future.

Glider Kit trucks offered by Thompson Truck Centers let customers purchase a truck tailored to their specific needs while eliminating the difficulties of finding all of the parts, getting quotes, and building an engine. The buyer chooses the preferred chassis model, Cat® engine, transmission, and accessories.  Then Thompson assembles the truck in conjunction with Fitzgerald Gliders.

CAT ENGINES ARE THEIR PREFERRED CHOICE
“My operators and I have always like Cat engines,” Espey comments.  “I run Cat in my other trucks, and I’ve owned Cat equipment on my farm. I had been buying other makes, but when Cat started offering gliders with Cat engines, I came back to Cat. The Cat engines are a major factor in my buying decisions.”

Espey Oil’s Terry Everett, operator of one of the company’s Peterbilt 389s, reports, “It’s got plenty of power, and it gets 6.8 miles a gallon.  They’re good-running trucks, with a comfortable cab. I drive around 550 miles every day – twice a day to either Memphis or Nashville.”

Espey says that his staff performs their basic maintenance on their gliders, but he utilizes Thompson for major maintenance and repair work.

Thompson also did a complete refurbishing job on a 2001 Peterbilt truck for Espey’s company.  Thompson Truck Centers Sales Manager Jody Cartwright explains, “We took the truck and removed the engine and rebuilt it just like a glider.  The process included stripping the truck all the way down to the frame, replacing the interior, polishing all wheels, and new paint, tires, new tanks, brakes, drums, reman transmission and rear axles, air conditioning system, radiator, and exhaust.  The engine and transmission have the same 4-year unlimited mileage warranty as a new glider.”

In the primary season for cotton production and harvesting – September through December – Espey reports that his cotton hauler trucks run every day; the fuel haulers are on the road four to five days every week.