The Giles County Highway Department maintains a busy schedule of projects along the Tennessee county’s 1,100-plus miles of road. The Department’s equipment fleet includes both older and new Cat machines – all of which are in constant use.

The Highway Department is located in Pulaski, county seat of Giles County (a vintage 1930s-era Cat grader is on display at the Department’s offices). The county, founded in 1809, covers 611 square miles on Tennessee’s border with Alabama. Road Superintendent Barry Hyatt says his department’s 38 employees maintain 314 bridges along with the county’s roads, which still includes some unpaved roads.

“We do regular bush hogging in the north and south sections of the county,” Hyatt reports. “We cut along the roads five times a year, and we patch the roads and do tree-trimming as needed. We’ve also had several hot-mix projects underway this year, totaling over $1 million; we typically contract these jobs out.

“Weather is our biggest challenge,” he continues.  “After every heavy rain, we deal with flooding, and ditches and roadways wash out. There’s a lot of clean-up that must be done, like after some recent storm which took down over 40 trees.  Storms stop our everyday work, which then gets delayed.”

An less-common department function is installing their own pipes, which Hyatt says is done to ensure their specifications are met. There is also a focus on the county’s numerous narrow bridges, which Hyatt says they are working to widen to at least a 20-foot width wherever possible, to increase road safety.

Hyatt, born and raised in Giles County, has a strong paving background – he has been a paving contractor since 1973. “I used a lot of Cat machines, running motor graders and other types, when I was in construction,” he relates. When he was in his teens, his family started their own paving company and operated an asphalt plant (a Cat wheel loader was part of their original fleet of equipment).

“Mostly, I was an operator on grading and paving jobs, but I did a little of everything,” he recalls. “The business continued until the late 1980s, when we sold it. Later I maintained a truck operation, and had a diesel repair shop, before I ran for this job in 2004.”

Like Hyatt, Shop Foreman Bob Jarratt is also a Giles County native. He worked for a Massey-Ferguson dealer and another repair shop before joining the Highway Department in 1984. “When I started here, we were running eleven Cat graders,” he recalls. “There were still a lot of unpaved roads then. Now we only have about 50 miles of gravel roads left in the county.” 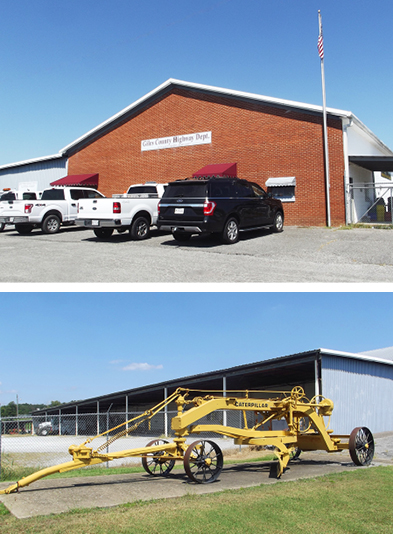 Jarratt reports that the Department fleet currently totals around 190 pieces of equipment. Their Cat machines include a new 140 Motor Grader and two new 420F2 backhoe loaders, as well as a 926 Wheel Loader, a 963 Track Loader, and an RR250 soil stabilizer – plus two 1991 model 140G Motor Graders. All of them are used nearly every day, he states.

Hyatt points out that the new 140G and the 420F2s were purchased utilizing the State of Tennessee Multi-Year Contract #048439, which is designed to help governmental agencies streamline the purchasing process.

Says Jarratt, “You can’t find fault with Cat machines.  And you can’t beat the parts and service. That support we get from Thompson Machinery is a big selling point for us.  We just pick up the phone and we have just about anything we need by the next morning.

“I wish all our machines were Cat machines.”