In his new role as Branch Manager, Preston will be responsible for all Cat machine sales, rental, parts, and service operations at the Jackson location.  When asked about his vision for the Jackson store, Preston replied, “It’s all about the customer experience and continuing to work to provide the best solutions for the local people in Jackson and surrounding communities… I want to give our customers the best experience they’ve ever had. That’s why I’m out delivering parts today as we speak.  Why?  Our parts shuttle driver is on vacation, and our customer is expecting the parts in his parts drop box.  It’s not the customers fault that we have a guy on vacation. They’re used to having parts in the drop boxes. So, you know what?  We’re going to figure it out. We’re going to get the parts to the drop box.  It’s all about asking, ‘What can we do to enhance our customer experience?’”

Preston is an East TN native, but moved to Jackson around the age of 12 and has been there ever since.  Having lived there for nearly 40 years, he considers Jackson his home. Preston grew up immersed in the construction industry with his dad working most of his life as an industrial electrician and retiring as a project manager. However, Preston recalled landing his first job in high school working at the brand-new Kroger grocery store in Jackson. “That was my first job in the customer service business.  I really enjoyed the interaction with customers and helping people, like the little old ladies who needed help finding a can of beans. I knew that was something I wanted to continue doing wherever I ended up.” After graduation, Preston worked at a welding supply company, now known as nexAir, which was his true start in the construction industry. Not long after, in late 1998, he received a phone call from Rental Service Corp., informing him that they were opening a new rental store in Jackson and were looking for a salesman. Preston started with the company in early 1999 and has been in the equipment industry ever since, with the majority of his expertise on the rental side of the business.

After 17 years of working as a salesman in the corporate world, Preston joined the team at Thompson Machinery, a family-owned Caterpillar dealer since 1944. Preston was hired as the Rental Store Manager at The Cat Rental Store at Thompson Machinery in Jackson, TN. When asked why he felt like Thompson was the right fit for him, Preston stated, “Thompson is a privately owned business, a family, you know their name. It’s an environment where you matter and feel valued. My personality is geared towards helping people, and that’s what Thompson is all about… They are a local business partner with the local community in Jackson, and I wanted to be a part of that.” Since joining the Thompson team in 2016, Preston has played a vital role in helping Thompson become the #1 rental market share leader in the Jackson area. Additionally, he has managed the Cat Rental Store in Memphis over the last year and a half, prior to accepting his new role as Jackson Branch Manager. When asked what he likes most about working for Thompson, Preston replied, “Every employee regardless of role has a voice. There are many opportunities to bring about change. It’s a small enough company that you still have a family feel, yet it’s large enough to support customers of all sizes and offer stability. After 76 years of business, you know they do things the right way, and are here today and tomorrow for their employees. Ultimately, at Thompson, you are valued as an individual.”

When asked what he wants the local community to know before visiting the Jackson location, Preston said, “Expect to feel welcome.  There’s always coffee ready and available, and if not, I’ll make some. Expect to be acknowledged when you walk in that front door. We are there to serve you and you are valued. You are more to us than just another dollar. We are not just another vendor; we want to be your business partner.”

Preston resides in Jackson, TN and is happily married to his wife Michelle, of nearly 32 years. They have two children, both of whom are fully grown and married. They have 3 grandchildren and are expecting their fourth grandchild early next year. In his free time, Preston enjoys turkey or deer hunting and watching the Tennessee Vols play football. His favorite restaurant in Jackson is Reggi’s BBQ and his favorite Cat machine is a D5 Dozer. 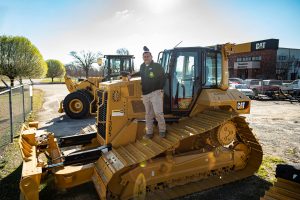